My generation was steeped in the notion of invention.  From Tom Swift to Bond movie villains to Star Trek and Beyond, the young minds of the 1950s and 60s were exposed to the idea that “life as we know it” could be transformed by inspired gadgetry.  Although it might be limited to ‘souping-up’ that junker in the garage, this fascination with tinkering could also contribute to the development of personal computers and microwave ovens.  Late-night TV ads continue to introduce products like the solar-powered fruit juicer or the Geezer Tweezer (I really hope this one doesn’t actually exist), and Sky Mall flogs them where we are at our most defenseless.  Sometimes these inventions–or at least the inventors–were malign or threatened to spin out of control.  The initial aim was seldom to make a gargantuan fortune–more often it was to explore the universe, or destroy it–but in retrospect, the profit motive looms large.  Especially for those of us who never tasted the financial fruits of creative genius.

My ambitions are modest.  Celebrating the spirit of Steve Jobs or at least Rube Goldberg, whose influence was still widespread fifty years after his comical machines first appeared, I like to imagine myself as the author of highly profitable breakthroughs in practical living.  Fantasy seems the best approach, since the likelihood of any genuinely new idea receiving patent approval appears to have fallen sharply since my debut as a putative inventor.  In 1965, fully two-thirds of US applications earned a patent: in 2015, it was barely half, and the intervening years saw some real troughs in wizardry (or perhaps standards were raised, for some reason).  To curb my irrational exuberance, however, I am restricting myself to three such innovations: salad in a bag, self-storage cubicles, and the street repaving machine.

*salad in a bag

Like so many technical innovations, salad in a bag clearly did not involve any startling new discoveries, rather just a savvy recombination of existing modalities.  Harvest, transport, washing in chlorine, and plastic packaging were all known before the advent of these “value-added” food products.  Some quasi-medical sources have credited the convenience of these items with putting more greens on America’s dinner tables–no bad thing, although recent incidents of added natural protein could counter this trend.  Invisible bacterial contamination is potentially a far more serious problem, but thus far it poses no greater threat to this $5-billion slice of the industry’s annual profts, than does the difficulty in opening the plastic bags.

Whoever came up with this idea surely earned a few bonus checks over the past 30 years.  Regardless of the financial incentives, giving “fast food” a better name must be a reward in itself.

However little ingenuity was required to invent salad in a bag, it took serious intellectual effort compared with renting out your garage for other people to store their junk in.  In a textbook example of “scaling up,” the storage entrepreneur simply builds a couple hundred garages.  The best news is that, unlike the taste for crispy veg, there seems to be no ceiling to the demand for space to put stuff you can’t get rid of otherwise.  This is a battle Marie Kondo will not be winning anytime soon.  From folks on the move to those whose belongings never move, self-storage is invaluable.  “American Pickers” and garage sales merely transfer stuff from one location to another.  Collecting mementos of the past, our own and others’, possibly represents our closest tie to history, since simply teaching it has fallen out of fashion.  Beyond these cultural guarantees of profit, there is now a demographic shift.  Baby Boomers are closing up the family home, but the children have yet to claim their stuff–result: more in storage.

All you need to get started is land and credit.  Contrary to popular belief, we’re not running out of either, provided you’re willing to move (!).  Over the past few years, “the industry has been very successful, and is recognized more as a good investment among private capital groups and real estate investors,” leading to the construction of 600 to 900 new facilities (garage villages, that is) per year.  In Montana, and likely elsewhere, there is a need to store seasonal gear, some of it considered unsightly by the neighbors.  In short, Americans continue to consume and accumulate, and so far no one has invented a cheap and safe way to incinerate plastic and rubber.  So we rent out above-ground landfills instead.  That it has taken me so long to perceive this fact is just one more symptom of that lack of entrepreneurial spirit that has condemned me to victimhood.  Our storage facility has just increased its charge for the coming year by 40%!  I would very much prefer to be on the receiving end of that.

Driving around the Midwest this summer, I have noticed something different about the proverbial “construction season.”  For a start, in respect of their venerable age–these “highways of the future” are ‘baby boomers’ themselves–interstates are often being replaced wholesale.  Instead of finding a miles-long line of orange cones blocking off one lane so the other can be patched (sometimes creating the familiar staccato thud-thud), drivers are shunted completely over to the oncoming side of the median, while entire bridges and roadways are reconstructed from the ground up.  But things have changed over 50 years.  The bulldozers and earth-movers of the past are largely absent–not to mention the “steam shovels”–in their place stand piles of pavement torn from their foundations and destined for a gigantic grinder, a sort of combination wood-chipper and grain conveyor.  This cold milling machine makes it possible to recycle most of the road; the granulated material will be incorporated into new pavement.  There are locomotive, self-contained alternatives to this concrete pulverizing mini-plant.  Not surprisingly, given that they invented the autobahn in the first place, German engineers pioneered this technology 30 years ago, at least according to their own press.  “The technological leap from hot milling to cold milling was sparked, in 1979, by the use of carbide-tipped point-attack cutting tools that were commonly used in the mining industry.”  US competitors for this business exist–Caterpillar offers a line with the charming and effective handle, “road reclaimers”–and there are conflicting international patent claims over key innovations.

It would be nice to imagine the Interstate system being scooped up and restored by the same All-American yellow monsters of my childhood.  Appealing as this picture is, however, nostalgia is not the only, or even the most significant, arena where the infrastructure crisis will be tackled.  It is also a struggle for hearts and minds, a fact recognized long ago by my personal hero-innovator, Mr. Angelo Benedetti, of Bedford, Ohio. 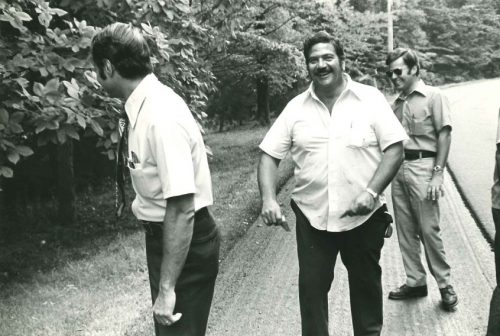 Benedetti served stints in the military (discharged 1961) and beautician school (where he met his future wife and office manager!) before turning to contracting.   About a decade later, he had perfected the prototype of his 40-foot-long street repaver, dubbed “the Beast.”  This contraption, early versions of which feature the skeleton of an old-fashioned road grader equipped with various tanks and tubes dispensing propane and very hot liquids, was able to melt, scrape up, and recycle the surface of the highway, all in one pass.  In retrospect, Benedetti extolled the savings in asphalt and oil that the Beast made possible–the company’s present-day publicity material fits neatly with the Green Movement–but it was way back in 1984 that he discovered the true mother lode, potholes.  His firm landed a contract with the town of Warren, Ohio, to repair several miles of streets without simply plopping on another fragile layer of black top.  Then, in 2008, Benedetti, Inc. sold some of its equipment (it holds patents in the US and Mexico–global is “pending”) to the City of Akron, which expected to save $7 million over ten years by using it for maintenance.

No one with a sense of scale or history could deny that the annoyance posed by deteriorating state and local roads dwarfs the more romantic Interstate challenge,* Federal infrastructure package or no.  The future was assured: sell four or five of these machines a year to city street works departments.  Benedetti’s “experiment” has been a great technical triumph, although it did somewhat diminish the traditional corps of youthful, shirtless laborers.  It also seems likely that he beat the Germans into the field with this process by a couple of years.  And maybe these feats of creativity and salesmanship were what first attracted the attention of the Discovery Channel.  The point of highlighting the Benedetti clan might have been to show that it takes patience and perseverance to make a fledgling business survive and succeed.  But the episode entitled “What’s America Worth?” took a different tack, under the inspiration of its host, our soon-to-be 45th President.  Mr. Trump gave a nod to what “made America the wealthiest country on earth”–ingenuity and hard work–but then quickly pivoted to his own unique insights.  “There are those who think America is a waning power.  They say we’re broke, I say they’re not looking hard enough,” he said, adopting his best pout.  “There is money to be had everywhere and I’m going to show you where.”  It’s all a kind of treasure hunt, and “moderation is just another word for failure.”

By contrast, the current spokesman of the family, Al, seems awed by the Benedettis’ success: “it’s really pretty amazing that an idea has grown into this multi-million-dollar business.”  The idea, of course, was not to outsmart those dummies who can’t see the opportunity America affords–the white middle class used to have little doubt about that–but actually to build something.  Now the Benedettis themselves may very well be Trump voters, the kind of folks who put Ohio and much of the Midwest out of reach for the Democrats in 2016.  But if someone must lend support to Trump and his con-man’s vision of autarkic prosperity, let it be people like this, not misguided evangelicals who believe he cares about “family values” or oil millionaires who scoff at global warming.

In America, I’ve learned, you don’t have to invent something.  But you do have to invent yourself, and everyone should get a fair shot at that.  In a newspaper interview, Angelo Benedetti once admitted, “I really didn’t know what I wanted to do for a living.”  Then he went on to realize his dream.  Bravo.  This Labor Day, let’s celebrate what we can all achieve.

This site uses Akismet to reduce spam. Learn how your comment data is processed.